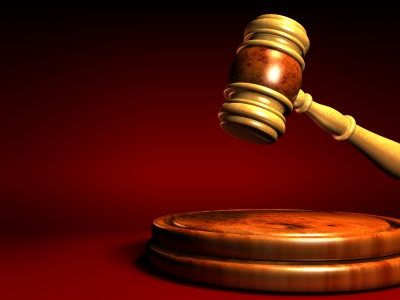 Although one of my favourite TV shows of all time is Boston Legal, every so often it put God in court – it put religious belief on trial. Here’s a courtroom scene in which a man is suing for unfair dismissal because his employer thought his religious beliefs were detrimental to his doing his job. (Watch here from 22:44 to 24:50, or the transcript is below.)

Plaintiff’s attorney: We’re talking about freedom of religion—the most basic of individual liberties. Scientology may seem a little wacky to Mr. Espenson. So what? We never hold religion up to standards of reasonableness. If we did, what religion could pass? Christian Scientists won’t go to the doctor. Jehovah’s Witnesses forbid singing the national anthem and buying Girl Scout cookies. Radical Islamists blow themselves up to meet virgins in heaven. The Hindus have their cow. People believe in all kinds of things. It is their right to do so under the First Amendment. But the defendant doesn’t want to afford that liberty to Douglas Karnes, because he believes that Scientology is just a little too out there, I guess. Come on. Freedom of religion means just that.
Defence attorney: Ugh, please. It’s a dumb freedom. An employee’s behavior reflects on their employer, for God’s sake. In this case, we’re talking about a law firm, a business in which clients look for good judgment, sound and sane counsel. This guy’s running around saying man evolved from a big clam after galactic warlords invaded our volcanoes. He’s a nutjob. And I don’t know about you, but I’m getting a little tired of this freedom of religion thing. When did religion get such a good name, anyway? Be it the Crusades, the Reformation genocides, the “troubles” in Northern Ireland, the Middle East, mass slaughters supposedly in the name of Allah, and then, of course, the obligatory reciprocal retribution. Hundreds of millions of people have died in religious conflicts. Hitler did his business in the name of his Creator. 9/11 was an act of religious extremism. It’s our greatest threat today—a Holy Jihad. If we’re not ready to strip religion of its sacred cow status, how ‘bout we at least scale back a little on the constitutional dogma exalting it as all get-out?
Your client was fired because he entered into an at-will employment contract, he acted like a complete loon, and he now tries to cloak himself in a constitutional amendment that is as overplayed as it is misapplied. Everybody should get to believe in God. Pray to his God, worship his God—of course. But to impose him on others, to victimize others in His Name, the Founding Fathers of this country set out to prevent persecution, not to license it. And for Jerry Espenson, struggling with his law practice to make ends meet, don’t tell me he’s not victimized when one of his lawyers bounces around, telling clients and other attorneys that, according to his most recent electro-psycho-meter reading, he’s getting closer to immortality, at which point he’ll be able to leave his body and talk to zebras. At a certain point, we have to say, “Enough with this freedom of religion crap. Yuck. Yuck, yuck.” (Walks back to his chair, sits, then stands again.) Yes, I know. I’ll get letters.

Christian Scientists were the target here, though to be fair, the show treated all gods and all religions equally. You can believe in them if you must, just don’t dare claim that it’s actually true, or try to persuade anyone else to believe what you believe. Religious belief might be a fun hobby, but don’t for a moment suggest that it has any rational basis.

Sadly, this sums up the prevailing view that comes from most sections of the media today. And you’ll get it, too, in your school, your university, your workplace. Religion in general – and often Jesus in particular – is on trial, day in and day out. And most of the time, the court proceedings are pretty one-sided, with very few willing or even able to present the case for the defence.

This week, in John 5, we see Jesus on trial. Not his ‘official’ court appearances before the Jewish leaders and before Pilate, where he was sentenced to be crucified, but on trial nonetheless. As he was for most of his public ministry, we find him on trial in the court of public opinion – with his opponents trying to find anything they can to discredit him.

In fact, John 5 follows the contour of an ancient trial – a statement of the facts of the case, the laying of charges, and the presentation of the defence in the form of a persuasive speech by the defendant. We even have a surprise, made-for-TV twist at the end where the prosecution witnesses end up being the ones on trial themselves! So can we learn anything from how Jesus presents his defence? Something that might help us as we seek to defend Jesus against the accusations and bias and ridicule so prevalent in our world? That’s what this week will be about – let’s get started.

Background: the facts of the case

John begins the chapter with the event that started the whole controversy – a miraculous healing of a crippled man. It’s this story we’ll focus on today:

John 5:1-3a Some time later, Jesus went up to Jerusalem for one of the Jewish festivals. 2 Now there is in Jerusalem near the Sheep Gate a pool, which in Aramaic is called Bethesda and which is surrounded by five covered colonnades. 3 Here a great number of disabled people used to lie—the blind, the lame, the paralyzed.

In most modern translations, there’s a verse-and-a-half missing, probably with a footnote. Those verses don’t appear in the earliest manuscripts of John’s Gospel, and look very much like an explanation someone scrawled in the margin that ended up becoming part of the main text in future copies. And it’s quite useful, as it explains why this guy was at the pool in the first place: (5:3b-4 “They were waiting for the moving of the water, because an angel would go down into the pool from time to time and stir up the water. Then the first one who got in after the water was stirred up recovered from whatever ailment he had.”)

John 5:5-9a One who was there had been an invalid for thirty-eight years. 6 When Jesus saw him lying there and learned that he had been in this condition for a long time, he asked him, “Do you want to get well?” 7 “Sir,” the invalid replied, “I have no one to help me into the pool when the water is stirred. While I am trying to get in, someone else goes down ahead of me.” 8 Then Jesus said to him, “Get up! Pick up your mat and walk.” 9 At once the man was cured; he picked up his mat and walked.

Now I’m not going to go into any detail on the miracle itself, because the relevance here is the controversy it creates. But basically, Jesus came across a guy who’d been sick for 38 years. He’d been waiting for someone to throw him into a special pool that supposedly had healing powers. But instead of giving him a shove, Jesus just tells him to get up and walk home. And the guy’s miraculously healed.

But John, the master storyteller, holds back the most vital piece of information until after the miracle has taken place:

John 9:b The day on which this took place was a Sabbath…

Cue ominous music. He healed a man on one day of the week when it was against Jewish law to do any work – including healing – unless someone’s life was in danger. Clearly, having already waited 38 years, the man could have waited one more day in order to be healed. But Jesus heals him anyway. Not only that, he instructs the man himself to break the Sabbath regulations by carrying his mat – again, something expressly prohibited by the law.

What’s Jesus up to? Doesn’t he know this’ll cause a stir? And remember, Jesus was the one who initiated the healing; he made the offer, not the other way around. It’s as though Jesus went looking for trouble, in order to come into conflict with the authorities. And sure enough, they take the bait. Have a listen to what happens next:

5:10-13  and so the Jewish leaders said to the man who had been healed, “It is the Sabbath; the law forbids you to carry your mat.” 11 But he replied, “The man who made me well said to me, ‘Pick up your mat and walk.’ “12 So they asked him, “Who is this fellow who told you to pick it up and walk?” 13 The man who was healed had no idea who it was, for Jesus had slipped away into the crowd that was there.

It looks like it might be a bit of an anticlimax, as the man can’t identify who healed him and told him to break the Sabbath. Until the man “just happens” to run into Jesus later in the day:

14 Later Jesus found him at the temple and said to him, “See, you are well again. Stop sinning or something worse may happen to you.” 15 The man went away and told the Jewish leaders that it was Jesus who had made him well.  16 So, because Jesus was doing these things on the Sabbath, the Jewish leaders began to persecute him.

Or perhaps in this context, “legally pursue him.” Now they know who it was, they’re gunning for Jesus. Having heard the statement of facts (today’s reading), tomorrow we look at the accusation made by the prosecution.

At this point in the story, how would you defend Jesus against the charge of breaking the Sabbath?