Yesterday, we left Daniel stuck in the lions’ den. What’s more, we sealed it with all of our signet rings so we’d know if someone had been in to help him. And then we spent a sleepless night wondering if God would rescue him. It’s time for part two:

Daniel 6:19-20 At the first light of dawn, the king got up and hurried to the lions’ den. 20 When he came near the den, he called to Daniel in an anguished voice, “Daniel, servant of the living God, has your God, whom you serve continually, been able to rescue you from the lions?”

I would have shouted “are you OK in there?” but he’s a king, so he’s probably had his speechwriter up all night crafting the perfect soundbyte.

Notice that the king is already quite well disposed toward Daniel’s God. He’s already expressed hope that his God would save him (v16 yesterday). Here, he calls him “the living God” and is at least hopeful that Daniel is miraculously still alive. (He’s not a true follower of this God, yet, otherwise he wouldn’t have agreed to the whole thirty day challenge in the first place.) And the reason for this positive vibe towards the God of Israel is, presumably, the witness of Daniel. Who “serves continually,” and has impressed Darius with his God-given wisdom and abilities (v3). Daniel’s conduct, thus far, hasn’t just given himself a good reputation; he’s given his God a good reputation, too.

So anyway, the king has gone to check on him. Although it’s not spelled out, this seems to have been some kind of “trial by ordeal.” If he can survive the night, he gets to live. (A bit like the old “if she floats, she’s a witch, but if she sinks, she’s not” – except that either way she’s sunk.) But enough of building the faux-tension. Will Daniel answer?

Daniel 6:21-22 Daniel answered, “May the king live forever! 22 My God sent his angel, and he shut the mouths of the lions. They have not hurt me, because I was found innocent in his sight. Nor have I ever done any wrong before you, Your Majesty.”

He’s survived the ordeal. God has declared him innocent, so he sent an angel to protect him. (A bit like the fourth dude in the furnace, back in chapter 3.) Daniel is vindicated by his God.

This makes the king happy:

Daniel 6:23 The king was overjoyed and gave orders to lift Daniel out of the den. And when Daniel was lifted from the den, no wound was found on him, because he had trusted in his God.

Just like his three mates didn’t even smell of smoke, back in chapter 3.

Then we get the bit that gets airbrushed from the Sunday School version. (Although not from this disturbing colouring book…) 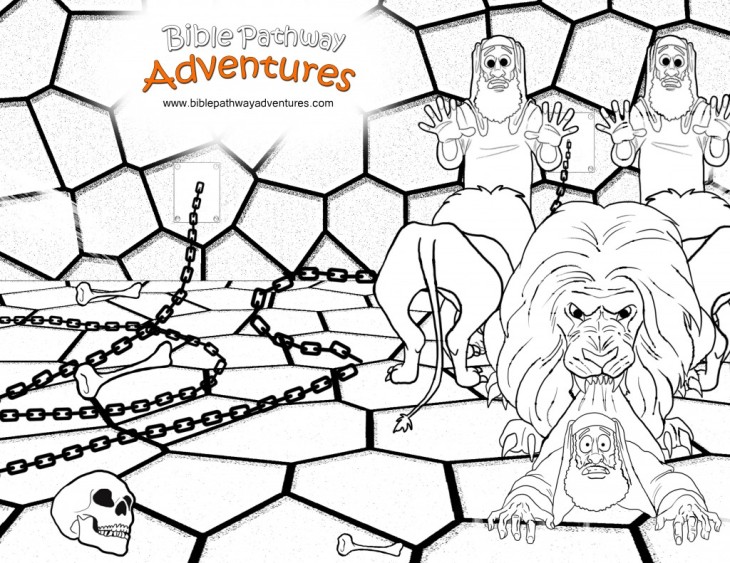 Daniel 6:24 At the king’s command, the men who had falsely accused Daniel were brought in and thrown into the lions’ den, along with their wives and children. And before they reached the floor of the den, the lions overpowered them and crushed all their bones.

Disgusting and horrific? Yes. But note that it’s Darius’s doing – not Daniel’s, and not God’s. (And note that as awful as it is, it’s pretty common in the ancient world to kill off your enemies and their families. Why? Two reasons. One, people’s legacy was their offspring – so there was the desire not just to kill their enemies, but to remove their name from being carried on into subsequent generations. And two, leaving the kids alive could lead to them growing up to exact revenge – so political assassinations often involved the whole family.)

This also shows that it was a miracle. The sealing of the door countered the first logical objection: did someone sneak in and help him? And the lions’ appetite counters the second: did someone feed and/or drug the lions beforehand? (No, drugging the Lions only happens in Australia. Allegedly.)

At any rate, Darius is more concerned with the fact that Daniel’s God won this showdown. And, echoing Nebuchadnezzar’s actions in previous chapters, he wants to tell the whole empire:

Daniel 6:25-27 Then King Darius wrote to all the nations and peoples of every language in all the earth: “May you prosper greatly! 26 “I issue a decree that in every part of my kingdom people must fear and reverence the God of Daniel. For he is the living God and he endures forever; his kingdom will not be destroyed, his dominion will never end. 27 He rescues and he saves; he performs signs and wonders in the heavens and on the earth. He has rescued Daniel from the power of the lions.”

We end this half of the book of Daniel with his status again enhanced, this time in the eyes of the new world rulers: the Persians:

So Daniel remains faithful to God, and God vindicates him. This again gives future generations a model for how to live as a faithful follower of God while under foreign rule. We won’t rehash that here at great length, as it’s been the theme of the past five chapters: Daniel models for second century Jews a “middle way.” Don’t compromise with the Greek rulers and in so doing lose your Jewish identity and sell out to idolatry. But at the same time, don’t openly and violently rebel against them. Instead, Daniel models winsome conduct toward foreign rulers, coupled with quiet but visible faithfulness to God whenever there’s a clash of loyalties. And above all, he models a patient trust in God to deliver, rather than trying to fix things himself, on his own terms.

But also, there’s a link with the bigger picture. The chapter began with a tiny glimmer of a hint that things might be changing in this new world order. Darius’s policy of appointing satraps and administrators was a change in the way things had been done under Babylon.

The Babylonians discouraged unrest among their conquered peoples by forced migration: bringing the best-and-brightest (like Daniel) of the conquered nations to Babylon and culturally “brainwashing” them, while at the same time resettling populations to other parts of the empire. It’s hard to have nationalistic sentiment, let alone a rebellion, when the people of your nation aren’t all in one place, and the next generation of leaders have been co-opted by the ruling empire! (It’s much like Russia moved populations from their satellite countries around during the Soviet era, resettling ethnic Russians in their place. It ensured there were elements loyal to Russia – even after the breakup of the Soviet Union, as witnessed by Eurovision voting patterns…)

But the Persians had a different strategy. They wanted to decentralise the empire, and give their conquered peoples an element of local self-rule. As long as they paid their taxes to the empire and didn’t rebel, they were given more freedom. More of the carrot, less of the stick in their approach. Maybe they’d do that for the Jews, too?

The final verse introduces the key figure who would make this happen: King Cyrus, who would allow the first wave of Jewish exiles to return to Jerusalem and begin the long process of rebuilding. Although this story is about the faithfulness of an individual – and God’s faithfulness to that individual – it’s also, at its edges, part of the story of God’s faithfulness to all of his exiled people. And that one day, his Servant would not merely relocate them physically back where they were supposed to be, but transform them into the people he always intended them to be.